Now that September is over, I have had sometime to go over all of my grocery data for the month.  September, October, and November are typically big spend months for me, as this is a time of year when there are many good sales on staple items (think holiday baking and gatherings) to take advantage of.  That is why I want to analyze our spending for an entire year, so that we will see how everything works out over an annual period.  Some months (like September) we will spend a lot more than others.  Having said that, there were a few things that significantly increased our grocery spending this September....let's recall:
a) our oven was broken for just over 2 weeks
b) half of our house is currently gutted as are completing a major (unanticipated) renovation
c) due to some pregnancy related health issues, I have had to purchase some food items I would not normally be spending money on.

So, without further delay, our total grocery spend for September was:
$689.49

What did we spend our money on?
Our biggest spend was on produce: $167.04.  This is quite a bit.  I spent a lot of money in September on Honey Crisp Apples. 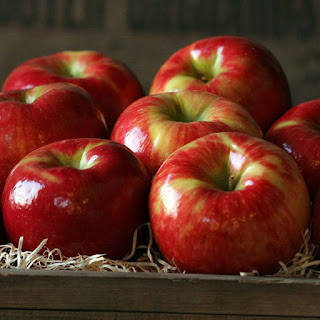 I love them.  I really, really love them.  But they are so expensive, usually $3.99 or $4.99 a pound.  I splurge and buy them when they are fresh and in season (September/October) but after that it is back to the less expensive apples.

We spent $106.98 on pantry supplies this month, which is right on track as it is a big stocking up month.  I stocked up on things like canned pineapple, stuffing mixes, tea, baking supplies, etc.

We spent $98.30 on meat.  In September I start stocking up on frozen turkeys when they are on sale for $0.99/lb.  I will buy a few more in December when they do on sale again before Christmas.

Next up, is dairy on which we spent $92.66.  Our family drinks a lot of milk.  We consume quite a bit of dairy when you consider cheeses, yogurt, and milk.  Unfortunately these items are just pricey in Canada.  We purchase most of our dairy at Costco, where I find the prices (particularly on cheeses) are the best.

We spent $47.35 on prepared foods which is just fine with me given that we had no oven for several weeks.

Money Saving in September:
The biggest money saving this month (aside from shopping the sales) came from three things:
1.  Ebates - This was not grocery related, but we ordered a number of items for our renovation through Ebates and earned about $50.00 in cashback.

3.  Shopping the Reduced Grocery Items - At one of my favourite grocery stores there is often a great selection of reduced items.  Whenever I am in the store, I make sure to check out the areas where the reduced items are kept.  This month I got some great deals on produce, meat, and premium orange juice.

So where does that leave us?

There are three main areas where I want to significantly reduce our spending next month.  Two of them should be straightforward, the third a bit more challenging.  I want to spend less on prepared foods (easily done now that our oven is fixed).  I want to spend less on beverages (easily done as the big spending was due to some health issues for which I need to buy certain beverages), probably only $10.00-$15.00 maximum instead of over $40.00.  Finally, bread.  I would love to make all our own bread from scratch, but I just do not have the time.  Making bread is not difficult, but you do need a few consecutive hours for mixing, proofing, and rising.  At this point I know it would be unrealistic to start trying to make all my own bread, but my new goal is to make our own bread at least once a month.  Maybe twice.

And so, we will see where October takes us.

Posted by Life Freedom Family at 6:28 AM