Ravings and Ramblings on a House Overhaul: Part 1

Readers know, because I have been mentioning it on and off for literally the past year, that we have done a massive renovation on our house.  There was no step by step follow along or regular updating on the endeavor, but now that it is (almost) completely finished I am going to share a bit about it.  This will not be your typical DIY post - but if anything I can rant about  share helps someone else with their project, that would be fantastic...

Let's start at the very beginning, a very good place to start...

A few years ago I wrote a small primer about our little house, which you can read here (Nutshell Recap: After searching high and low in the GTA we bought a house in 2012 which we managed to find for well under $500K, which if you live in this area you know is very hard to do).  When we bought our house we were debating between it and one other option, which cost significantly more but was a larger house.  In the end, we went with the lower priced house knowing that if we wanted to make improvements (or if we had to) we would be in a better financial position to do so.  We have never regretted this decision.  Not even for one second.

While living at this house we have done a few improvements (like renovating our main bathroom which was so poorly designed and small that we could barely walk through it without touching both sides of the wall in some spots).  We also did a major exterior renovation (also known as landscaping!) which was the best money I think we spent on our house.  It increased ourliving space, did wonders for the curb appeal of the house, and increased the amount of time we spent outside playing with our kids exponentially.  The other work we did to our house was superficial, largely painting rooms and furnishing them.  We redid the closet in our master bedroom.  We turned one of the rooms into a guest bedroom and upcycled furniture where we could.  All of these projects were done a few years ago, and not part of our current renovation.  Fast forward to 2016...

One day in August 2016 I walked down to our basement and discovered the floor was damp, but thankfully not flooded.  Noooooo!!  I knew, immediately, that if this was water coming in from the outside as opposed to a plumbing problem coming from upstairs we would be looking at a minimum $25,000.00 in repairs - and that would just be for interior weeping tile.  I will spare you all the minute details - but yes - in the end we had water coming in from outside (this is a common problem in older houses in Ontario) and so we had to gut our entire basement, have an interior weeping tile installed and then restart from almost scratch.

This involved:
-all new flooring, insulation, drywall
- new cabinets and sink for the basement wet bar (also so it can easily be converted to a basement apartment for resale)
-we completely rebuilt a basement bathroom.

We also had to replace our roof, the pump in our septic tank (not the source of the basement leak, but it died and needed to be replaced), and one of our sump pumps.  And this is just for the basement.

This unwanted project fell into our lap when I was about 30 weeks pregnant with Baby #2.  By the time I was 31 weeks pregnant I became very, very ill and was pretty much bedridden for the rest of my pregnancy.  The baby arrived early, but not preterm, when our house was in complete shambles and our basement was gutted.  While we were doing our renovation, we rented a storage cube which became infested with mice and the company refused to allow us to claim any damages.  This was so infuriating and I don't want to write much more about it because I still get angry when I think about it.  This meant we were out about $3000.00.  Let me just say this: Never use Cube-It.

I wish that I could say this entire situation was handled with grace and ease...but no.  It was very stressful and some days I was miserable (just ask my husband).  Nonetheless, I was reminded of a few important lessons:

1.  Sometimes it doesn't matter how smart you are with money, life happens.
We have been very careful not to take on any non-mortgage debt since we got married.  We did take on a car payment after my husband was in a car accident (his car was a write-off but he was unhurt) and we had to suddenly replace a vehicle, but otherwise we have no "consumer" debt.  Knowing that I was going to be on maternity leave, I saved up a significant sum to cover some major expenses we knew were coming up and some slush money.  All of this went up in smoke when we had to do all this unplanned work to our house.  We had to take on some debt.  Now, it is "house debt" but it is still debt and you know what - this is alright.  It is not ideal, it is not what we would have wanted - but this is life.  Sometimes these things just happen and are beyond our control.  I cannot allow myself to be constantly stressed because we had to stop water from creeping into our basement.  We will get it paid off and life will move forward.

2.  Careful research is the key to saving money on a home renovation.  Do not rush.
What I found over and over again during this massive project, is that I was able to save significant amounts of money by carefully researching all of my options.  Time and time again taking some extra time to investigate something, read up on something, or get an additional quote paid off.  And that does not mean we always went with the cheapest option - we always went with what we thought was the best long term option.

Floorplan: We made no changes to the footprint of the basement.  This is the easiest way to save money.  As soon as you start moving plumbing around.....big money!

Flooring: We went with carpet and professional grade plank vinyl.  I would have done the whole basement in the vinyl but it was more cost effective to do the split.  If you have not investigated vinyl flooring in years - I highly recommend it.  It is highly water resistant, cost effective, resilient, and the look of it has come along well.  I know many food based businesses who are using the professional luxury vinyl now as their main flooring.

Do what you can, not what you can't!
We did all of the demo and removal of junk ourselves.  For everything else we hired a contractor.  Normally we would do all the painting ourselves (this is our first time hiring a painter), but because of my health issues during pregnancy it was not a possibility this time.  Hiring a well-researched professional, especially for electrical and plumbing work is key.  If you do not know how to do it - don't!!


These pictures are in the house's current state.  In Part Two I will discuss the bathroom renovation (it needs its own post).  In Part 3 I will talk about the upstairs/main floor of the house.  In the final part I will show the final product in all of its glory. 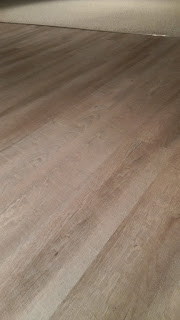 Countertop: Here is reason # 1 while I will probably never be featured on a DIY or reno blog.  HGTV will never call me.  I like laminate countertops.  Don't get me wrong - I love the look of stone countertops (and we do have stone elsewhere in our house) - but I just do not understand spending thousands of dollars on a countertop.  It is just a countertop.  I am an avid cook and I have never said to myself, "Gee....you know what would make this food taste so much better?  If it was cooked on an expensive slab of Carrara marble."  Never!  I have never, in the middle of a major canning session, said "Oh this Blueberry Maple Pecan Chutney would be so much easier to make if I had a gigantic quartz island."  Friends, it just hasn't happened.  And so, for our basement countertops I bought Luna Frost (1849) Laminate countertop made by Wilson Art.  It cost $640 installed.


Cabinetry:  Due to the space we were filling, we knew we would be best suited to get custom cabinetry.  We did get solid wood cabinets and shelves - but we may not have done this if we did not have a personal connection which enabled us to get them at wholesale prices.  To save money we got open shelving for the uppers and no upper cabinets. 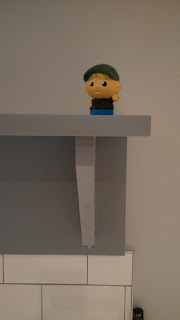 This is what we have so far.  More to come soon...