You know those days when you:
a) don't feel like cooking
b) are almost out of groceries
c) don't have time to make anything
d) all of the above

Why yes, yes I do.  Despite all efforts to keep the fridge and pantry stocked, there are times when I really have to just throw something together.  Here are a few of my favourite "emergency" meals:

1.  Hard boiled eggs.  Why?  They are good for you.  They can go with just about anything - whip up a quick egg salad wrap or sandwich, a deviled egg, just eat a plain old hard boiled egg with toast.  Put some egg salad on crackers.  Make it work!

2.  Tuna.  Tuna with mayonnaise - on a cracker, on a bun, on bread, on toast (tuna melts!!!), with leftover rice and peas or corn, with noodles, with pasta.  Another quick protein packed meal.

3.  Natural peanut butter - on toast, on bread, in a wrap, on crackers.  Especially great with a side of raisins and or banana.

4.  Chef Boyardee Mini Ravioli.  This is one of the few canned foods I buy to keep on hand for those Quick and Dirty meals.  A little Mini Ravioli with some fresh grated mozzarella on top goes a long way.

5.  Kraft Dinner.  I go through phases where I can and cannot bring myself to eat Kraft Dinner.  I don't know why.  I'm cyclical I guess.  I can also tolerate the President's Choice Macaroni and Cheese.  A small portion of this served with a side of corn or peas, maybe even some tuna, is always a hit with my little guy.

6.  BEANS!!!  Baked beans.  I like to make my own and have some on hand, but I also keep some canned ones on hand (always) in case I am out.  My son loves these.  And beans go with.......well.....toast, eggs, pancakes, rice, creamy corn, cornbread, chicken, a nice bun, grean beans....whatever you may have in your pantry or leftovers in your fridge.  One of my favourite quick and dirty meals.

7.  Pancakes.  They are super quick to make (especially if you use the Krusteaz mix from Costco.  I love serving up pancakes with eggs, beans, leftover ham, cheese, fresh fruit and whipping cream for a special treat, topped with natural peanut butter and maple syrup, or my husband's favourite - a little bit of Nutella.

8.  Grilled cheese.  I do not know why kids love grilled cheese so much, but I am not complaining.  Who doesn't love a hot grilled cheese with some Ketchup and nice glass of cold milk?  Perhaps served with a side of tomato soup.

9.  Quesadillas.  If I have a wrap or two hanging around the kitchen, I can stuff it with pretty much anything (cheese, veggies, meat - my favourite is cheese, cumin, mayo, corn and chicken) then toss it on my griddle for a minute or two and presto!  Dinner is served.

10.  Buy a pizza.  No, this does not really count as making it yourself but when you consider the cost of cheese, I find it is a great deal to pick up a pizza from Costco or from Pizzaville (if you live in the GTA).  Plus - I usually have some leftovers I can take for lunch the next day.

Posted by Life Freedom Family at 8:26 AM No comments:

Earlier this year my father celebrated his sixtieth birthday and we marked the occasion with a large party.  Because my father is an avid skier, the theme of the party was Après Ski Sixty.  Brilliant, non?  Having a party for this many people catered would cost much more than I wanted to spend, so I decided to make all the good myself.  This was a great money saving idea, but also a bit nuts.  I started cooking a few months before the party and freezing as much as I possibly could make ahead.  The format of the party was an open house in the afternoon - I was not really sure how much people would eat.  As it turned out, I had lots and lots of food - which is not a bad thing.  I definitely underestimated how much alcohol people would drink - but thankfully we had lots of wine and beer on hand, knowing that we could return any unopened bottles after the party.

So what did we make?

Let's start with what we made ahead:
Last year, Ricardo magazine ran a feature on bundt cakes that were well suited for a party.  They could all be made ahead and frozen, making it perfect for this party.  I made of the different bundt cake recipes from this feature:
Lemon Bundt Cake
Chocolate Bundt Cake
Yellow Bundt Cake
Vanilla Bundt Cake  (This recipe is particularly versatile, I always get asked for the recipe when I make it.  It is delicious topped with fruit and whipped cream, or covered in Dulce de leche.)
After baking these cakes and allowing them to cool, I wrapped them carefull in aluminum foil then placed them in labeled freezer bags and popped them in the freezer.

In addition to these cakes, I made the Carrot Cake recipe from Bonnie Stern's Friday Night Dinners, and a Banana Cake.  Like the bundt cakes, these were made in advance and frozen.

The cakes were all used to make a Create Your Own cake buffet which I will say a bit more about later.

Other desserts that were made ahead and frozen were:
Almond Biscotti
Greek Wedding Cookies
Brazil Nut Biscotti
All of these recipes are from Bonnie Stern's Friday Night Dinners.

Those are all the sweet things I made in advance.  As far as more appetizer or entrée type dishes go, I made two pulled pork roasts (in the Crock-Pot) and two batches of chili using my own recipe.  Again, everything went into the freezer.

What did I make just before the party?
The day before the party I was still cooking like a madwoman, making a batch of Chuck's Chocolate Brownies, two batches of Peanut Butter brownies (this recipe is from a Bon Appétit cookbook - but I cannot find it anywhere online).  I also made Egg and Smoked Trout Salad from the Rosh Hashanah menu in Friday Night Dinners.  This smoked trout salad was a huge hit with the guests at the party.

So, how did it go?
Prepping all this food was a lot of work, but it was worth it.  It cost far less than if the party had been catered. 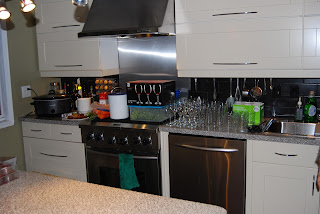 The kitchen was well stocked with glasses, stemware, coffee, tea, soft drinks, and lots of wine and beer. 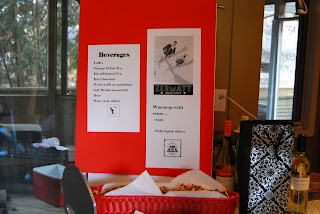 A menu was posted and guests were invited to order up cups of hot chili or pulled pork sliders.
I also hired a university student I know to work as a bartender and server of hot food. 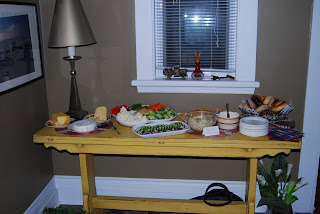 An appetizer buffet included fresh vegetables, an assortment of cheeses, the Egg and Smoked Trout spread, and fresh bagels (I did not make these myself - I bought them from What A Bagel - the BEST bagels - in Thornhill the morning of the party) and cream cheese. 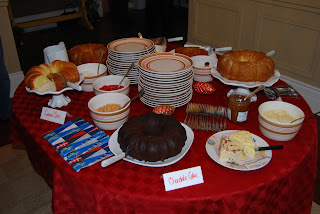 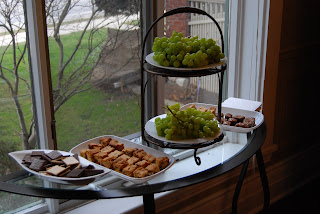 There was also some fresh fruit, the brownies, cookies, and some chocolates that I purchased 50% off in post-Christmas sales.

The final verdict:
With some careful planning hosting a party for a large number of guests can be done on a reasonable budget.  Do not be intimidated by a big crowd - just plan ahead and make good use of your freezer space.  Over 50% of the party budget was spent on alcohol, so if you are needing to really cut costs consider cutting back on the booze.  We had lots of food leftover, but that is ok because we shared it with guests and ate the leftovers ourselves (just remember - food should not be refrozen once thawed).  The key to planning a large party like this is to do as much in advance as possible.