This month has been crazy.  I have to be honest and say I have been getting a little down about money this month.  We have just had so many unexpected expenses relating to our unplanned (but necessary) renovation.  However, I realized the best medicine for this little downtime is to reassess all the finances, recognize what we are doing well (hurray!), and identify where we can improve.  So here we go.

In February, we spent $408.03 on groceries.  Let's break this down a little bit:
At the end of the month, we were out of a number of key pantry supplies (olive oil, maple syrup, running low on flour, etc.).  I knew that I had a $71 cheque from Ebates that I was planning to use towards these purchases, but I also knew that going to Costco to get the supplies for the months ahead would significantly raise our grocery spend for the month.  Prior to the stock up on items I needed, we had only spent $230.00 on groceries for the month.  Very reasonable.  Anyway, after sitting around for a few days I realized that my waiting was silly.  The whole point of doing this project over a full year is so I can average out what we spend each month.  So off to Costco I went with my cash from the Ebates cheque in hand.  If you consider the Ebates money I used, our cash output on groceries this month was $338.00.

What did we buy this month?
I've realized we have a drinking problem.  Not alcohol, but beverages.  We used to only drink milk or water, with the occasional orange juice purchase.  Then, when I was pregnant I was having severe cramps in my legs and my doctor suggested drinking tonic water every day.  Tonic water is gross so I was mixing it with other juices in order to drink it without gagging.  I developed several infections at the end of my pregnancy, and in an effort to prevent getting a bladder infection after birth I was also drinking a fair bit of cranberry juice.  These little drink habits continued.....to the point where last month I spent $58.00 on drinks.  Whoa!  That is way, way too much.  Going forward, I am limiting the beverages purchases (outside of milk) to $10.00 MAX.  This will still allow me to purchase the occasional orange juice or Pure Leaf Iced Tea (which I love).

We spent $89.71 on produce this month, largely because we bought a Vitamix (which I will devote an entire post to later) and we were experimenting with some different recipes.

We spent $4.70 on meat.  I used all meat and fish we had in our freezer, except for purchasing two Reduced for Quick Sale chicken breasts one day.  They were preseasoned and delicious.  My husband took one to work for his lunch one day, and I used the other one for two meals.  I made a chicken sandwich for lunch, and a chicken salad for dinner (and shared both meals with my three year old).

My plan for the next three months (March, April, May) is to use as much as our supplies as I can.  When June rolls around the fresh Ontario crops will start becoming available and I will be able to plant out garden in mid-May or early June depending on the weather.

What did we eat this month?
This month we ate lots of chili, turkey, ground beef and pasta with homemade sauce, homemade pizza (more about this in the Vitamix post soon to come), smoothies, quiche (I usually buy eggs for $1.77 a dozen at Shoppers Drug Mart), salads, and frozen fish.

How did we save money this month?
I was very careful with the grocery spending this month.

1.  I used a $71.00 Ebates cheque towards the purchase of pantry supplies from Costco.

2.  I redeemed $85.00 worth of Shoppers Optimum points on a bonus redemption today.  This was used to purchase diapers.  Lots of diapers.

3.  Over the weekend, I spent $90.00 at Shoppers Drug Mart.  However, I had a $25.00 gift card I received for my birthday so I spent $65.00 cash.  Due to a promotion they were offering, I received a $10.00 voucher to use in store at a later date, a $10.00 voucher that can be used at several area restaurants, and a $10.00 voucher for the online BeautyBoutique.ca.  $30.00 in gift cards is a pretty good deal - especially because I have special plans for all of these cards that I will write about as I use them.  If you live in Canada, the $10.00 Beauty Boutique promotion is still on - you can get the card when making a purchase at a Shoppers Drug Mart in store.  The promotion is while supplies last.

4.  I redeemed some of my points through Pampers Rewards to order a $10.00 diaper voucher.  I am going to do the same redemption again next month.

5.  While ordering some books online (with a gift card someone gave me), I noticed two books I thought my father would love for Father's Day were steeply discounted.  I ordered them at excellent prices and through Ebates.

Goals for next month: Absolutely slash the beverage purchases and use as much from our pantry and freezer as possible.

Posted by Life Freedom Family at 6:07 AM 3 comments:

One of the things I love about living in Toronto is that I can quickly get to various communities that have unique offerings.  One of my favourite GTA communities is Thornhill.  I love Thornhill for many reasons, but what I am going to tell you about today is the food.  Thornhill is home to a significant Jewish population, hence it is a good place to find a variety of Kosher, Middle Eastern, and Eastern European food items.  One of my favourite places to shop in Thornhill is Sobeys Kosher Market.  It is what its name suggests - a largely Kosher Sobeys.  I love it.  It has been recently renovated and so it is very clean, very fresh, and the in store lighting is really nice.  We are not Jewish, so I do not need to get Kosher meat - but if you do this is the place to go (You may also be interested to know that in the same plaza there is a Judaica store, a Kosher restaurant and a Kosher Second Cup).  I go to this store for its excellent and well priced selection of cooking spices (some of which are pictured below).  Perez spices are some of my favourite to use when cooking and the selection at this store is excellent.  There is also a great selection of horse radishes, beet radishes, sauerkraut, pickles, and fresh bakery items at the Kosher Sobeys. 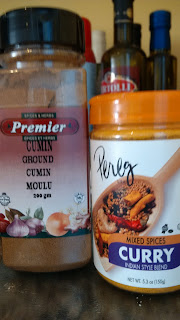 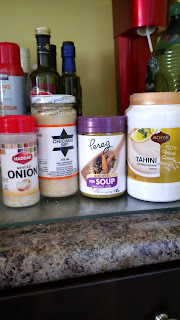 Moving right along, just around the corner from Sobeys Kosher Market is one of my favourite bakeries: Amadeus Patisserie.  The confections here are incredible.  Amadeus even imports its butter from France.  My personal favourite from Amadeus is the Pistachio Delight.  Simply magnificent!  There is a small eat in café at the patisserie as well.

Finally, if you are anywhere along Bathurst Street I highly recommend stopping at one of the many What A Bagel locations.  Here you will find the freshest bagels in the GTA.  Pick up a dozen along with fresh cream cheese in a variety of flavours and you will be very popular!  Also - they have rainbow bagels for the kids.

If you are looking to do some shopping while you are in the area the Promenade has a good selection of stores, although I mainly stick to Gymboree when I am there.

And there you have it.  A few places to stop and eat if you find yourself in Thornhill.  Personally, I think it is worth the trip.

Posted by Life Freedom Family at 5:44 AM No comments:

Last week, I made this delicious recipe for "Thank Goodness It's The Weekend Chocolate Cream Pie" from Bonnie Stern's Friday Night Dinners.  It was AMAZING.  Somehow it tasted even better after it had been sitting in the fridge for 48 hours.  This is an incredibly yummy, very rich pie.  You can find the recipe here.  You will not regret making this tasty treat. 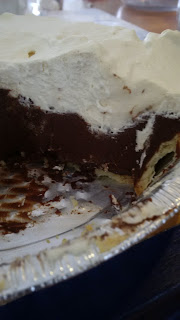 Posted by Life Freedom Family at 11:15 AM No comments: