With the Jewish New Year quickly approaching, I thought I would repost the Rosh Hashanah menu from Friday Night Dinners.  It is one of my favourites.  The Sparkling Pomegranate Sangria, the Egg Salad and Smoked Trout Spread, the Country Mash, the Prime Rib.......and two of the best (in my opinion) dessert recipes from the book - Ruthie's Apple Cake and Ginger Molasses Cookies.

See the menu and recipes here.
Posted by Life Freedom Family at 5:56 PM No comments:

Back in January, I cooked the Dinner With Kids menu from Friday Night Dinners.  There is a recipe in this meny for No Knead Artisanal Bread that I could not make at the time because I did not have the right cooking equipment.  Fast forward 8 months (8 months!! What??  When did that happen?), and I recently invested in two Le Creuset French Ovens.

Sidebar:  My first Le Creuset purchase was during one of the The Bay's flash sales.  They had two different Le Creuset French Ovens at a significantly reduced price.  I took the plunge and bought one - also using Ebates during a Double Cash Back special, meaning I got 5% cash back.
Next up, we were recently on holiday in the States and we visited Sur La Table.  This is my absolute favourite (chain) kitchen store.  The prices here are amazing and they sell top of the line kitchenware.  I was able to get a 6.75qt round and wide French Oven from Le Creuset 40% off through a series of promotions and discounts.  If you live in a bordertown and are looking at investing in some Le Creuset, you will not regret a trip to Sur La Table.

Now, where was I?

The bread.  Right.  To make the No Knead Artisan Bread you need a cast iron dutch oven style pot: enter - my Le Creuset French Oven.  This weekend we made the bread. 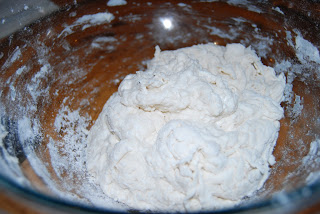 You start by mixing the dough - which is essentially flour, water, and yeast.  The recipe uses All Purpose Flour, which I love because it means you do not need to have Bread Flour. 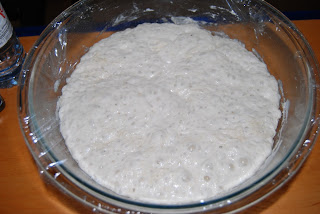 The dough is covered with plastic wrap and a tea towel, then left to rise for 12-24 hours.  I let my bread rise for about 13 hours. 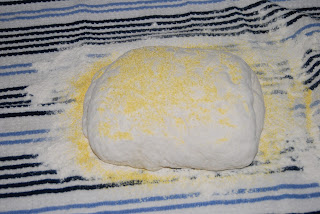 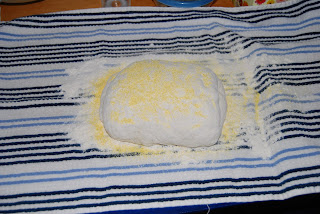 After the first rising period, the dough is patted down then folded into a little cube.  The dough goes for its second rise which is only 2 hours. 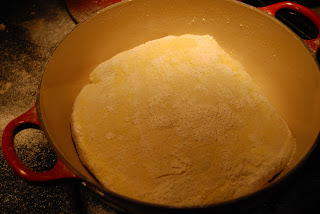 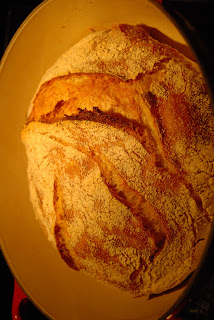 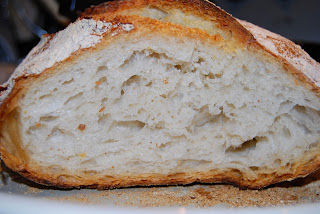 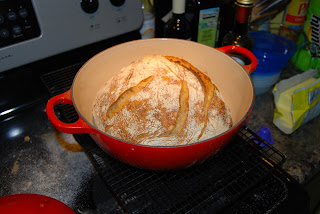 The dough is popped into your dutch oven and cooked at a very high temperature (450F).  And that's it.  Bread is done.  So easy.  Does the bread taste good?  YES!  It certainly does.  This recipe is great, easy, cheap, and you get beautiful artisan style bread.  My only note is that I found the crust a bit tough and chewy - although it was great for dipping in soup.  When I make this bread again, I think shorten the cooking time slightly to have a softer crust.

This bread is also open for experimentation.  In Friday Night Dinners, Bonnie mentions multiple variations which include adding black olives, adding dried cranberries and nuts, adding raisins, and the list goes on.

If you love fresh homemade bread - this recipe is for you.  Here is the link to Bonnie Stern's Six Hour No Knead Artisanal Bread Recipe.
Posted by Life Freedom Family at 7:45 AM No comments:

About those Planned Parenthood Videos

Sickening does not begin to describe it.

Posted by Life Freedom Family at 10:59 AM No comments:

I loved baked beans.  I mean, I really love them.  When we lived in Québec, one of my friends often made incredible maple baked beans from scratch.  Breakfast just was not the same without them.  When we lived in the UK, tomato flavoured baked beans were served with every English breakfast - and of course - they were a favourite topping on jacket potatoes (a baked potato served as an entrée with various possible toppings).  And who doesn't love some good old BBQ beans with cornbread and chicken?  Or served as a side with fajitas?  Oh man, now I'm hungry.  OK, let's get to the point.

For quite some time I was scouring the internet for a BBQ Baked Beans recipe that I could make without having turn on the oven - and that did not involve using canned beans.  Well, I could't find out.  I found some good recipes from Ricardo, The Pioneer Woman, and Paula Deen but none of them were exactly what I was looking for.  In the end, I took parts from all of these recipes to come up with a made from scratch in the Slow Cooker BBQ Baked Beans.  It's good.  Real good.

Easy Steps to Delicious BBQ Beans:
1.  Put the beans in a large bowl and cover them with water.  Let the beans soak overnight (even up to 12 hours) at room temperature.  Make sure the beans are always submerged in water.  Rinse and drain the beans.

2.  Put both onion halves in the slow cooker.  Add the beans, chicken broth, maple syrup, dry mustard and 1 cup of the BBQ sauce.  Place the bacon, in strips, on top of all ingredients. 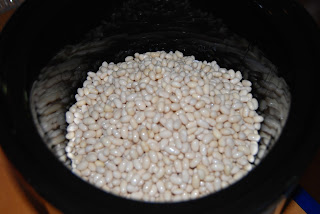 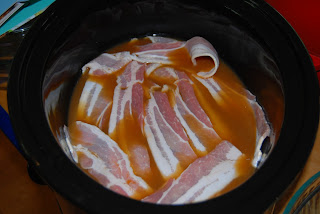 3.  Cover and cook on low for 10 hours (cooking time will vary depending on your slow cooker).

4.  You can use a slotted spoon to remove the onion from the slow cooker.  You may also wish to remove the bacon (I remove what I can, but you can most certainly leave it in).

5.  Taste time - check your beans and adjust the amount of BBQ sauce as you see fit. 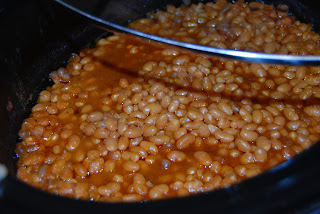 Posted by Life Freedom Family at 10:50 AM No comments:

After reading this menu several months ago, I decided to save it for summer for no other reason than that I thought it seemed like a wonderful summer meal - and it is!

Wild Mushroom Mini Strudels (aka Spinach and Feta Mini Strudels)
My husband refuses to eat mushrooms (although I love them), so I was very glad to see the alternate filling suggest of spinach and feta for this recipe.  If you are nervous about working with phyllo pastry this is an excellent recipe to start off with - it is very easy to make, looks good and tastes delicious!  The spinach and feta filling was quick to whip up - and even my young son was eager to eat these spinach strudels.

The other filling suggestion a mushroom and goat cheese combination - sounds delicious.

This is the salad you want to make when you are having company, or when you need to take a salad to a summer picnic.  This is a truly wonderful Greek salad that can be served with or without lettuce.  It does not take long to prepare and it tastes simply excellent. (Click here for a somewhat similar recipe from Bonnie Stern.) 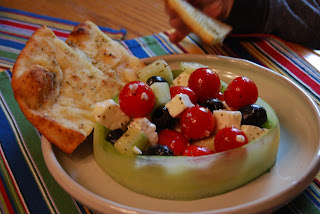 Swordfish Souvlaki with Lemon Dressing and Mediterranean Rice Pilaf
The intro notes to this recipe suggest that it can be made with extra-firm tofu, lamb, chicken, fresh tuna, or swordfish.  I opted for chicken, mainly for cost reasons.  This recipe is quick and easy to make.  Also of note - is the tzatziki recipe that accompanies it.  This recipe merits its own page in the book, although it does not get one.  This tzatziki has graced our table on many, many occasions.  I whip it up on my Cuisinart mini food processor in a matter of minutes.  Of course, it tastes great with this chicken, or as a dip with fresh vegetables, or grilled pita.  I really enjoyed the rice - it has a light lemon flavour. 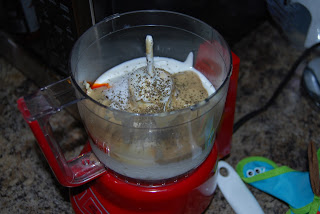 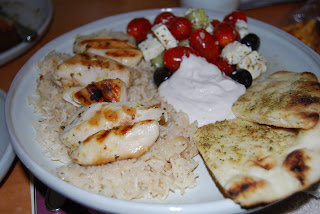 Greek Wedding Cookies
You guys.  These cookies!!!
These cookies are simply divine.  I could (um I did) eat almost the entire batch myself.  I do not drink coffee - but I imagine that these cookies would be really nice with a strong cup of coffee.  The recipe says they melt in your mouth - and they do.  Soooooo good.  It is a real pity I cannot find the recipe for these reproduced with permission online.  Buy the book people!! 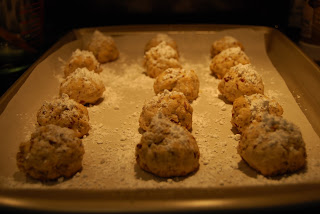 Lemon Yogurt Cake with Lemon Glaze
This was not my first time making this recipe.  It's a good one.  The Lemon Yogurt Cake is surprisingly moist and very sweet.  I always make it with unflavoured yogurt and not the buttermilk.  I have also made it with lime instead of lemon (I love lime).  This was the first time I made the Lemon Glaze for the cake, and I have to say that even though the glaze is delicious, I actually found it incredibly sweet (too sweet for me) when paired with this already sweet cake.  It was good - but definitely for someone with a real sweet tooth.  This cake is just fabulous on its own or topped with mixed berries and a bit of fresh whipped cream.  I have made it in a loaf pan, for this time I made it in a round 9 inch pan.  Delicious. 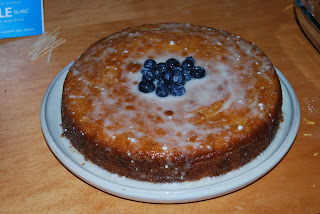 More Friday Night Dinner Menus to come in a few weeks!
Posted by Life Freedom Family at 10:30 AM No comments: